If juiced-up Kyles and Naruto running can’t break into a super-secret government test site, what can? 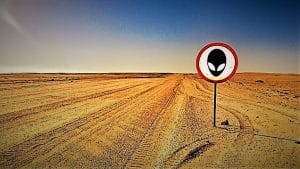 It all started as an ingenious social media post from a 20-year-old Naruto-loving petroleum engineer. But now, the “Storm Area 51, They Can’t Stop All of Us” Facebook page has turned an innocent joke into a worldwide internet phenomenon.

The Facebook page, created by college student Matty Roberts, has become a viral hit with over 3 million users interested in taking part in the extraterrestrial revolution. The event is scheduled to take place in Amargosa Valley, Nevada on Friday September 20th from 3 AM to 6 AM PDT. Attendees are instructed to meet at the Area 51 Alien center tourist attraction to coordinate their plan of entry into the military base.

Roberts, who is surprised the FBI hasn’t shown up at his house yet, claims he never imagined the publicity his June 27th Facebook group would get. With plans to “Naruto run” to avoid bullets, and a main goal to “see them aliens”, the whole charade is more laughable than anything. But after only three days of being on Facebook, the page had gained over 1 million followers. The event even has its own website where you can purchase “Storm Area 51”-themed merchandise and listen to event-inspired songs. While the whole thing may seem like an elaborate scheme to ruffle some feathers, government officials have begun questioning the seriousness of the situation.

It’s highly unlikely the 1.9 million people planning on attending the event will actually show up, but those at the Area 51 training facility are starting to get a bit antsy. Last week, the Air Force released a statement saying that Area 51 “is an open training range for the U.S. Air Force, and we would discourage anyone from trying to come into the area where we train American armed forces. The U.S. Air Force always stands ready to protect America and its assets”. While these statements are vague on how the military will react to the indefinite raid, the use of deadly force isn’t completely out of the question.

Despite the threat of serious consequences, the number of those interested in the event continues to rise. New plans to turn the stunt into an alien-themed EDM festival is increasing in popularity. Rumors that artists like Travis Scott and Drake will attend the event have brought it even more publicity. Owners of the Little A’Le’Inn hotel nearby have had an influx in reserved rooms around the time of the scheduled event and are currently booked the entire weekend.

Whether or not the raid will result in the liberation of extraterrestrials, the “Storm Area 51” event has become a major social media influence. Other Facebook pages like “Storm Loch Ness, Nessie can’t hide from all of us” and “Storm the Bermuda Triangle, it can’t swallow all of us” are quickly gaining popularity. The legitimacy of these events are still up in the air, but are nonetheless extremely comical. We will just have to wait and see if the Naruto run will really work.

Want to read more on Area 51? Check out my other blogs here!