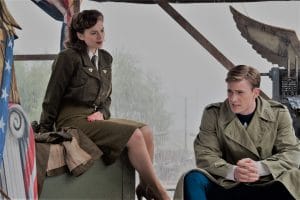 Peggy Carter is more than just a hot Marvel girlfriend

The What If animated anthology series will show alternative versions of different Marvel characters and events. Of all the possible alternatives, Peggy Carter as a version of Captain America is the most exciting.

For many Marvel fans, this brief clip confirms what they already know. Peggy Carter is easily a hero on par with that of her more famous old flame, Captain America. Yes, Steve Rogers can stop a plane with his bare hands. Big deal! Peggy Carter rose through the ranks of the Strategic Scientific Reserve and went on to be a founder and the first director of S.H.I.E.L.D. In all ways, she is more impressive and heroic than Steve Rogers.

For further evidence, take a look at her entrance to the Marvel Cinematic Universe in Captain America: The First Avenger. Puny Steve Rogers stands amongst the candidates for Project Rebirth when Agent Carter strolls in. Immediately, she calls them to attention and introduces herself as the supervisor for all operations in that particular division. 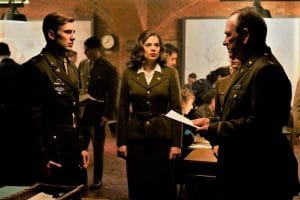 Imagine what it must have taken for a woman like Peggy to rise through the ranks to become the supervisor of an entire division. In the film, there are few other women present and certainly none as powerful as Peggy. She is the only one supervising training or observing the Project Rebirth experiment. She is in a class amongst herself.

Agent Carter is also not a woman who will allow herself to be disrespected by her subordinates. When Gilmore Hodge, another Project Rebirth candidate, questions why a Brit is supervising the U.S. Army, she makes him step forward and asks his name. Hodge then makes a lewd comment about them wrestling and “special” moves he has that she will like, resulting in her knocking him to the ground with a single punch.

In this moment, Peggy fiercely defends her own authority. She will not allow such behavior to continue and undermine the operations of her unit. Furthermore, she has the freedom to defend her position as the division’s supervisor. When Captain Philips walks onto this scene, he simply remarks that he’s glad to see Agent Carter is breaking in new candidates and commands Hodge to get back in line and listen when someone gives him a command. Clearly, Peggy has the support of her superiors, who see her value of a member of this division.

It’s not hard to understand why Steve Rogers has heart eyes for Peggy Carter after that. Throughout the film, she continues to demonstrate her capability and strength. When Rogers chases after Dr. Erskine’s killer, Agent Carter follows and manages to shoot the driver of the car. When Rogers is determined to go and save Bucky, Agent Carter recruits Howard Stark and commanders a plane. Whenever she can, she makes herself useful.

Peggy’s support to Steve is vital, but she is not merely the girlfriend to Captain America. Perhaps she might have been in the hands of a lesser actress, but Hayley Atwell plays Peggy with a quiet but fierce strength. She takes up space in a room, and she gets things done. With Peggy, there is always a sense that she has everything handled.

At the end of Captain America: The First Avenger, Steve crashes his plane into the Artic and is presumed dead. In a brief scene, Peggy is packing up the SSR offices when Captain Phillips gives her Roger’s file. It is marked as inactive. She looks through it and smiles at the photo of pre-serum Steve.

Her role in the MCU could have ended here with this scene. Instead, however, Peggy Carter would continue to appear in Marvel films and television shows.

First, she had a brief scene in Captain America: The Winter Soldier where Steve visits Peggy, now in her 90s, living in a retirement home and suffering from Alzheimer. Then, she had another brief scene in Ant-Man set in 1989 where Peggy appeared in her 70s as the director of S.H.I.E.L.D. when Hank Pym handed in his resignation.

Next, she appeared in flashback scenes in Agents of S.H.I.E.L.D. with the Howling Commandos, taking down the last Hydra base and arresting Werner Reinhardt. All of this led up to the creation of her own TV series, Agent Carter. This show, which aired for only two seasons, followed Peggy as she continued to work for the Strategic Scientific Reserve as an agent and eventually created S.H.I.E.L.D. in partnership with Howard Stark.

Taken all together, these appearances show a woman who started as an agent and worked her way up to be the director of the most powerful agency in the MCU. It shows her dealing with sexism and other people’s doubts as she does her job efficiently and competently. It follows Peggy from a young woman to her death, which is arguably a richer and fuller arc than that of Steve Rogers.

Steve Rogers was presumed dead and christened a hero, a symbol of hope. Peggy, however, had to do what true heroes do: get up every day and do the work. She continued to work in espionage after the war, all the way up to the 21st century. In Agents of S.H.I.E.L.D., it is implied by a member of Hydra that the agency didn’t dare rise while Director Carter was in charge. If that’s not a mark of hero, what else is?

What do you think of Peggy Carter? What appearance of hers is your favorite? Let us know below in the comments!

Jillian Law is a student, writer, and blogging intern at NRMStreamcast™ When she’s not writing blogs, Jillian also enjoys Marvel movies, Netflix sitcoms, and working on her own creative writing and blogging projects. She currently studies English, Journalism & Public Relations at Madonna University.