If babies in plastic bubbles and a lullaby-singing Mads Mikkelsen isn’t weird enough for you, gaming mastermind Hideo Kojima just made things a whole lot weirder. 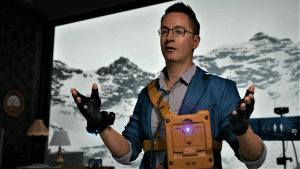 Over the weekend, Hideo Kojima released his San Diego Comic Con cutscene trailer for his upcoming PS4 game, Death Stranding. The trailer features Heartman, voiced by Darren Jacobs, who is the newest addition to the already star-studded cast. Heartman’s character dies every 21 minutes only to be shocked back to life by an automatic defibrillator two minutes later. This unusually resourceful technique allows Heartman to wander the “world of the dead”, but for what reason, we aren’t quite sure yet.

Death Stranding is an open world action game starring Norman Reedus as Sam, a post-apocalyptic delivery man of sorts with the goal of reconnecting isolated cities in a newly shattered world. Players must traverse between the world of the living and the dead while avoiding otherworldly creatures and rain that ages anything it touches. The melancholy atmosphere of the game isn’t unusual for Kojima, but it is becoming more obvious that Death Stranding is unlike any other game before it. 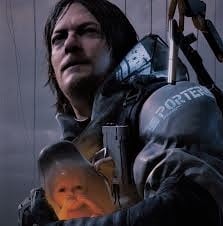 With the help of directors Guillermo del Toro and Nicolas Winding Refn, Kojima has created a bizarre world where the bad guys aren’t the deadliest danger. The game features both thrifty and high-tech gear including the “Bridge baby“, a live infant that is carried in a portable tank which is used as a link to the “other side”. Breathe-taking terrain and intricate storylines make it seem less like a game and more like a movie-theater blockbuster.

The entire production of Death Stranding has been entertainingly mysterious. Despite a handful of trailers and stunning gameplay images, there are still a lot of questions left unanswered. The initial E3 announcement back in 2016 has had avid fans and players anxious for its long-awaited release. With the promise of it being a “genre-defining experience“, fans are more eager than ever. Death Stranding is set to hit PlayStation November 8th.

Do you like nerding out as much as I do? Check out my other stuff here!